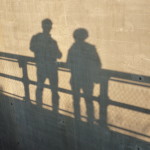 I had been stuck on the sequel to my YA novel Runaway Storm for a long time. I couldn’t figure out what the problem was, but I knew something wasn’t clicking. After completing almost an entire draft, I had decided the story was too edgy and dark. It had drifted far from the fun boys-against-the-wilderness coming of age storyline into a drug-addled world of abandonment.  No! No! I could not let this happen to my beloved main character David. I threw away about half of the manuscript and re-plotted. After all, what kind of a disenchanted adult would David grow up to be if he lived through so much horror? I slashed the darkness through the pages until it was only ankle deep. No steep mountains, no black bat-filled caves or murky oceans.  And I had succeeded. David would grow up without worry lines etched deeply into his young face. He would indeed be a very fine young man… just not a man of very good character. Oops, I mean, he just didn’t make a very good character anymore. In loving him so much, I had made him unlovable. By taking away all the challenges and dangers, I stopped worrying about him. (Ah, Mom relaxes.)  But as a book character, I had made him bland and uninteresting. A pretty flat character that even I couldn’t care about, so no reader would care either.

It was time to re-examine my intentions. I was now a good mother and a lousy writer. But wait had my worlds merged? Was it truly reality that had intruded into my story and my character? Aha! That was the key. Subconsciously, I think I had transferred my own teenage son into my character. How could I let anything bad happen to either of them? And where is a good “Writing therapist” when you need one?

Fortunately, I was able to figure it out. I had to separate the “real boy” from the character. I had to jump back into David’s head and I had to let him fall off a cliff and struggle to climb back up.  I had to remember that the darker and harder the challenges, the stronger my character would become.

Although I do not want my son to suffer quite so many challenges, I do know that fiction and reality run parallel. Both teenagers, real and imagined, have to grow through their own experiences and learning to fix their own problems, as painful as that can be for both mothers and writers.

6 thoughts on “Love Your Characters, but Not Too Much!”