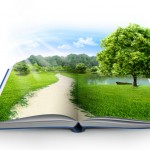 I am sitting across the table from 17 year-old Grace in a Vietnamese restaurant.
She’s chewing on a hangnail instead of digging into her pho chicken soup.
“Lets play the portrait game,” I say, hoping it might start her talking. “How about that guy in the corner. Think he’s having a text fight with his girl friend?” I ask.

Grace shifts her eyes over to the man then back to her hangnail. “I’m just glad he’s really there. I’m never sure about the guys lurking in the corners.”

“Still seeing things in the shadows?” I ask.

She drops her hand and her stealth blue eyes freeze in on me. “They don’t stay in the shadows anymore. I can hardly tell the difference unless I bang into them.” She snickers. “Which means I don’t bang into them ‘cause they’re really not there.”

“Have you talked to the doctor about it lately?”

“Yeah. You should be proud. He gave me some meds and I even took them.”

“They made me feel stunned and I think I slept 20 out of every 24 hours. Does that count as improvement?”

“That sucks.” I pick at my salad. I don’t know what else to say.

Grace picks up her spoon, digs into the broth and slurps up a long strand of the noodles. She’s turned her attention toward the guy in the corner and I am relieved. I learn more about her condition every time we sit down and chat but it’s never an entirely comfortable situation.

Grace is back to chewing her hang nail between furtive glances to the back of the restaurant. “That guy isn’t talking to anyone,” she finally says. “He doesn’t want to look like an idiot with no friends out having lunch by himself.”

“Hey,” I say. “If that’s self-referral then I don’t count for being here at all.”

“No,” she says and her mouth flips into an actual smile. “You’re just some uninteresting character from outside of this book…”

Grace is a character from an Unfinished novel by Mar-lou Elders and myself. Her environment along with her problems and challenges have changed numerous times as the story has evolved, but the nut of who Grace is, has always been there. The more I take her out into the world, the richer her character becomes in the story. Soooo—

Now it’s your turn. You need to know how your character will react in every situation you put him or her in, so take her out for coffee or lunch. Then tell us…What does he order? Does she care who’s around? Is he nervous in public? Have a conversation. I promise your character will take on a whole new depth and I can’t wait to hear what he or she is saying, so be sure to post a paragraph or two here.

2 thoughts on “Taking Your Character Out of Context”