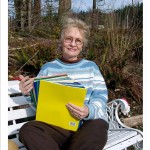 I’ve been waiting. My writing partner Stephanie has been waiting, too. We are both waiting for the same thing: for life to settle down so we can get back to revising our middle-grade manuscript.
(An editor is patiently waiting, too—we hope.)

So why all this waiting?

This has been one of those unexpected-events-in-life summers. MOVING! And I mean more than getting out of my desk chair and taking a walk. I mean choosing a different house, selling the house I thought I’d never sell, packing billions of boxes, piling those boxes in a new house, unpacking those boxes, trying to decide what goes where. (I swear I rearranged things on the living room mantle at least a dozen times, and I’m still not sure it’s right.) Decisions!

Yup! I moved. I moved about six streets from where I lived before. BUT—I wasn’t the only one.

Stephanie moved, too. She can tell you all about her move (much farther than six streets) in her blog post coming up.

Writing during this time is brief: what’s in each box, all packed and taped, and what room does it belong in.

Writing during this time fills Post-It notes galore: things to do, arrange, give away, buy, calls to make etc.

And then there’s getting the office disassembled and reassembled, with fingers crossed that everything will work. And when it doesn’t,trying to figure out why.

Moving is not for sissies!

During all this moving, the revision has been waiting. But the time hasn’t been wasted. Time away from any work always seems to help to see the story in a clearer light. There’s that voice problem with the one character. I think there’s a solution now. The motivations of the characters can be shown in a clearer way, perhaps. Got to check to be sure we’ve shown what’s at stake, physically and emotionally.

Yeah! Waiting. Maybe not such a bad thing after all. Could mean a much better story. Now it’s time to stop waiting and get busy revising. Ready, Stephanie?

4 thoughts on “THE VALUE OF WAITING”